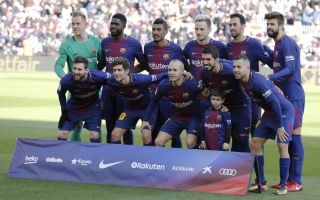 Barcelona host Valencia in La Liga as they attempt to put the disappointment of not qualifying for the Champions League semi-finals behind them.

Ernesto Valverde’s side have only appeared in one semi-final in five years and suffered a shocking exit from the quarter-finals of Europe’s premier club competition at the hands of Roma, whose 3-0 win on Tuesday saw the Italians through on away goals.

The loss put an end to an unbeaten streak that had stretched to 19 games in all competitions, however they can still do a Primera Division league and Copa Del Rey cup double.

Barca are unbeaten in the league after 31 games – winning 24 – and they are 11 points clear of Atletico Madrid.

When is Barcelona vs Valencia and what time is kick-off?

The game on Saturday, April 14 at the Nou Camp.

However, it will streamed on Bet365.

Philippe Coutinho, could return after he was ineligible for the Champions League.

Sergio Busquets has been named in the 18-man panel for the game and Andres Iniesta also played through a knock on Tuesday.

There was bad news for Ivan Rakitic and he will undergo surgery on a fractured finger.

Valencia will be without Toni Lato (hamstring), while former Arsenal midfielder Francis Coquelin with an Achilles issue.

Javi Jiminez is also out of action with a knee injury.