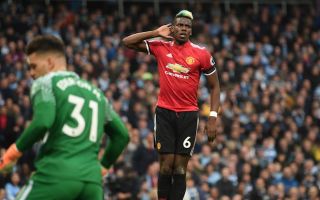 As noted by the Manchester Evening News back in December, City had caused a stir not only with their loud music following a win in the Manchester derby at Old Trafford, but also for goading their rivals with a dressing room celebration video after a win over Tottenham.

SEE MORE: Manchester United set to beat Manchester City to £100m transfer that could be pivotal in next season’s title race

Naturally, that wouldn’t have gone down well with their city rivals, and in fairness, it arguably shows a little lack of class on their part without suggesting that Man Utd haven’t been guilty of that in the past either.

Nevertheless, after coming back from 2-0 down at half-time at the Etihad last weekend to complete a sensational turnaround and secure a 3-2 victory which ensured that Pep Guardiola and his men couldn’t celebrate winning the title just yet, United players made the most of it.

According to The Sun, not only did the Red Devils get their own back with loud music after the game in their dressing room, but they are said to have been particularly vocal on the pitch in the second half when addressing reports that City had already booked tables at restaurants to celebrate their title success.

“Booked tables have you? We’ll take your f***ing tables”, they are reported to have said, with Manchester-born Jesse Lingard leading the way as it would have undoubtedly meant that little bit more to him than most of his teammates.

City will ultimately have the last laugh though as they’ll be expected to go on and wrap up the title sooner rather than later to add that trophy to their League Cup success.

However, United still have a chance with the FA Cup to ensure that they pick up some silverware, while Guardiola will have areas to address still given their failures in that competition as well as in the Champions League this past week.

What looked to be a nightmare evening turned into a dream for Man Utd last Saturday, but they’ll know themselves too that poking fun at City for merely not winning the title against them is not good enough in terms of their own standards and expectations for success.