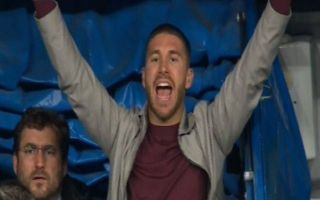 Judging by their performance against Juventus this week, the last thing that Real Madrid need is to be without Sergio Ramos again this season.

The 32-year-old was suspended for the second leg at the Bernabeu, and with youngster Jesus Vallejo coming in to replace him, Los Blancos couldn’t cope with Juve’s threat as they conceded three goals.

Fortunately, Cristiano Ronaldo was on hand to score a crucial penalty in injury time to send them through to the semi-finals, with Friday’s draw pitting them against Bayern Munich in the last four.

Ramos had seemingly risked picking up another suspension as having been spotted in the stands for the first half at the Bernabeu on Wednesday night, he was later seen pitchside.

Given his ban, he wasn’t seemingly permitted to do that, but as reported by La Gazzetta dello Sport, UEFA have confirmed that the Spanish international will not be suspended for it as he remained away from the area in which he wasn’t allowed to enter.

In turn, that’s excellent news for Real Madrid and Zinedine Zidane, who will breathe a huge sigh of relief as they evidently need their defensive leader marshalling the backline, especially at this stage of the tournament.

With Vallejo struggling to fill the void alongside Raphael Varane, it does arguably raise a bigger question mark over the depth in this Real Madrid squad if they can’t call upon an experienced and reliable defender to step in.

In the short term though, they will be delighted to have Ramos available for the first leg later this month as they go in search of their fourth Champions League trophy in the last five years.