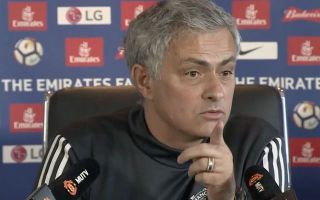 Man Utd boss Jose Mourinho has been speaking to the media on Friday, with the topics of discussion seemingly centring around the futures of key players at the club.

The Red Devils take on West Bromwich Albion at Old Trafford on Sunday, as they continue to push on and secure second place in the Premier League table.

After their big win over Man City last time out, Mourinho will be hoping that his side can build up momentum to end the campaign, particularly with their FA Cup semi-final clash with Tottenham also to consider.

However, rather than speak too much on the weekend’s opponents, it seemed as though the Portuguese tactician spent more time talking about his future transfer plans, and the future of key individuals already in his squad.

Man Utd injury news: “Everyone is perfect, apart from Romero,” said Mourinho, as per the Manchester Evening News. “All the players [who were injured] are ready to play.”

Mourinho on number of Rashford appearances: “If I was you I would go in another direction, he is the player with more appearances since I arrived at the club.” But why most off the bench? “Because I decide that way.”

“Is the same answer. Only 11 can start. The same questions you are doing to me, you should do to every other manager because everyone has players in the same situation.”