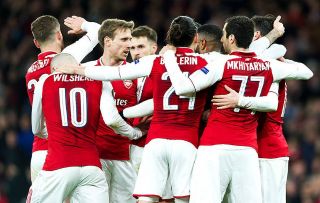 The Gunners made hard work to progress to the semi-finals when they came from 2-0 down to draw the second leg of their quarter-final at CSKA Moscow 2-2 yesterday, progressing 6-3 on aggregate against the Russian side.

Arsene Wenger’s men will have to shore up their defence against the likes of Antoine Griezmann and old nemesis Diego Costa.

“Looking at all the results as a whole picture in Europe this week, you would say that teams have become closer and the games are very open and everything is possible in every single game.

“Everybody speaks about Atletico Madrid that they look the strongest team on paper, but you must say when you look at the results that Salzburg have done again… I am from France and Marseille are in there as well and that is always a difficult place to go… maybe it is better that I don’t wish for anybody.”

The other semi-final will be between French club Marseille and Austrian outfit Salzburg, who advanced following wins over RB Leipzig and Lazio respectively.

The first legs will be played on April 26, with the second legs on May 3.

Arsene Wenger’s side will host Atletico at the Emirates on April 26 in the first-ever competitive meeting between the two clubs before returning to face the Spanish side at Wanda Metropolitano on May 3.