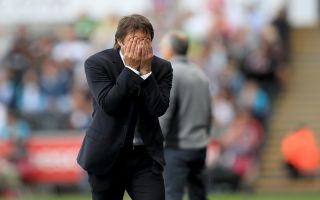 Chelsea’s hopes of securing a top-four finish in the Premier League have slipped away in recent weeks, and the misery continued on Saturday.

The Blues fell behind early on at Southampton, and with a 10-point deficit to wipe out to fourth-placed Tottenham, Antonio Conte’s men can ill-afford any more slip-ups between now and the end of the season.

While they still have the FA Cup as a possible piece of silverware to salvage something from the campaign, the Chelsea faithful will undoubtedly be hoping to see their side finish the domestic season in strong fashion too.

However, Dusan Tadic gave the Saints the lead in the 21st minute, with the home side facing their own battle to avoid relegation this season and very much looking up for the challenge on Saturday against a lacklustre Chelsea side.

With Conte cutting a despondent figure on the sidelines, lacking his usual passion and barking out orders, it seems that the fans below were far from impressed with the Italian tactician, but specifically the players.

Seemingly second best to most 50/50 tackles, Chelsea looked off the pace in the early stages and that’s reflected in the furious and frustrated comments left below on Twitter…

Disgrace absolutely disgusting who is markin who nonsense

This is getting beyond a joke now.

Shocking how bad we are

Goal made by Ryan Bertrand our former player. That’s odd, not like us to sell a perfectly good player and replace them with someone worse and more expensive.

They are playing like they’ve giving up on the season. Why is morata still starting? Why is fabregas is still starting? These are the players who have given time and confidence but given nothing back this season. I prefer Hudson odoi or giroud, and drink water or Baka

Just going through the motions waiting for the season to end.