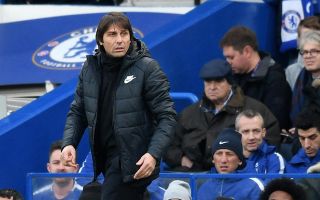 Chelsea take on Southampton in the early kick-off on Saturday, undoubtedly hoping to keep their slim chances of a top-four finish alive.

The Blues start the day 10 points adrift of Tottenham with just six games remaining, and so after their costly draw at home with West Ham United last time out, it may have all-but ended Antonio Conte’s hopes of being in the Champions League next season.

While they still have the FA Cup to consider, they will undoubtedly want to end the Premier League campaign off in strong fashion too to build up some momentum, and so they’ll be desperate for three points against the Saints.

Mark Hughes will also be desperate, but for very different reasons as his side face a battle at the wrong end of the table given that they’re in a relegation dogfight.

Southampton sit in the bottom three, just three points away from safety, but with time running out they know they will have to pick up points quickly.

Whether they can take advantage of Chelsea’s recent slip-ups, with the Blues looking to avoid a three-game winless run, remains to be seen. Conte though, as expected, has gone with a very strong line-up to avoid further disappointment.

There is no place for Antonio Rudiger though, as the Chelsea fans below believe that his comments in midweek have resulted in him being dropped.

No Rudiger because he called out Conte. He’s so insecure lmaoooo.

oh rudiger is dropped after calling conte out on his tactics, imagine my shock

what does emerson have to do to start? Conte out

Emerson on the bench again fuck off Conte

Rudi saya something against Conte not even in Match day squad. LOL Conte hates getting questioned on his shit tactics.

he dropped rudiger and doesnt play emerson ahead of alonso, there is clearly something wrong with this man

Rudiger dropped after his comment last week? Not surprised.

Lol ????… Like we all predicted… Rudiger has sustained a mysterious injury… #CFC