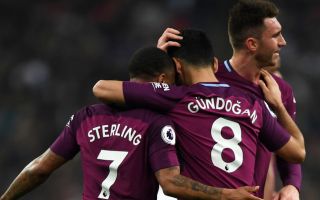 Manchester City swept aside Tottenham at Wembley with an emphatic 3-1 victory.

Gabriel Jesus, Raheem Sterling and Ilkay Gundogan scored for Manchester City as they were victorious over Tottenham at Wembley.

City took an early 2-0 lead after just 25 minutes. The game looked to be settled early on before Christian Eriksen registered a goal on the 42nd minute going into half-time. All eyes were on Pep Guardiola’s side in the second-half with the pressure on to not lose from a 2-0 lead in a parallel fashion to the loss to Manchester United last weekend.

Raheem Sterling registered a vital third however on the 72nd minute to seal the three points for Guardiola’s City side.

Manchester City looked back to their frightening best today going forward and they carved out an enormous 17 chances in just 90 minutes. Kevin De Bruyne looked superb in the centre of City’s midfield and could have produced the assist of the season if Raheem Sterling had finished an audacious piece of skill started by De Bruyne in the second-half.

Raheem Sterling scored a vital third and is enjoying his most prolific season in the Premier League. However, today it could have been far more for the England international. Sterling was granted clear-cut chances aplenty and even squandered a chance from just six-yards when Hugo Lloris was nowhere to be seen. Sterling deserves praise for constantly finding himself in goalscoring opportunities but he could be scoring so many more.

22 – Raheem Sterling scored his 22nd goal of the season for Manchester City, which is now at least twice as many as he’s registered in any of his previous seasons in all competitions (11 in 2014/15 and 2015/16). Pepped. pic.twitter.com/9Na0fCNgmm

Hugo Lloris produced an outrageous challenge for City’s second goal that came from the spot. The Frenchman arguably was lucky to see just yellow, although it could also be argued that Tottenham were unlucky to be penalised with a penalty with the challenge appearing to take place just outside the box rather than inside.

Lloris has produced a mistake that has lead to a goal in his last three consecutive Premier League fixtures and the once reassuring and consistent quality of the Frenchman is now being questioned.

Lloris 4 mistakes in his last 5 matches. Pundits seriously need to start talking about his tendency to make costly errors.