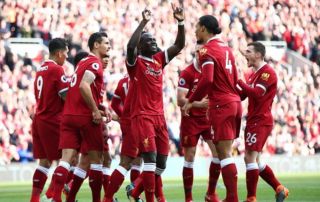 Mohamed Salah scored his 30th Premier League goal of the season this afternoon, as the Egyptian’s fantastic header helped Liverpool secure a 3-0 win over Bournemouth to close the gap on rivals Man United to just one point.

Liverpool opened the scoring through a goal in the sixth minute from Sadio Mane, with Salah then bagging with just under half an hour to go to wrap up the points for Jurgen Klopp’s side. Roberto Firmino then added a third in added time to secure the win for the home team.

The win now means the Reds sit on 70 points, just one behind rivals Man United in second place.

We’ve selected the Good, the Impressive and the Insane from Liverpool’s comfortable win over the Cherries.

We’re just lost for words with Mohamed Salah at this point. The Egyptian now has 40 goals in all competition this season, with the former Chelsea man now sitting just three below Cristiano Ronaldo and one ahead of Lionel Messi for goals this campaign.

The forward is certainly more than deserving of the Premier League Player of the Season award should he win it, with calls of a Ballon D’Or not too unambitious for the 25-year-old.

With the Reds now just one point behind Man United, they’ll be hoping Salah’s goals can steer them to their first runners-up finish since 2009.

This fan certainly agrees with our views on Salah!

What a GOAL! Mo Salah is on a different planet at the moment. A quality header to double Liverpool's lead.

Trent Alexander-Arnold put on a real show for Jurgen Klop’s side today, with the young Englishman showing exactly why some have been calling for him to be included in England’s squad for the World Cup.

The defender was very solid at the back for the Reds, and even bagged a fantastic assist in the second half for his troubles as he gave Bourenmouth’s left hand side a torrid time this afternoon.

Let’s just talk about Mo Salah’s goal for a second. A fantastic ball from Alexander-Arnold to a sublime, looping header from the Egyptian to wrap up all three points for Liverpool.

Salah hasn’t scored many with his head this campaign, however his goal today showed that he’s certainly got it in his locker to do so, and that he is capable of scoring all types of goals, no matter the situation.

This supporter sums up the forward’s world class header brilliantly.

Mohamed Salah has no right to lob the keeper with that header. None. What a player. pic.twitter.com/pzXaoryJHC