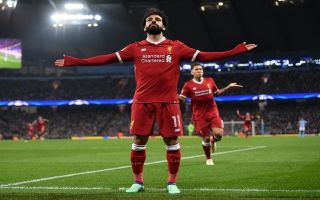 The nominees for the PFA Player of the Year award were announced on Saturday, and although Mohamed Salah was included, Liverpool fans weren’t happy.

The Egyptian international was joined by Kevin De Bruyne, David De Gea, Harry Kane, David Silva and Leroy Sane in the six-man shortlist, which has already been voted on.

Given his impressive hauls of 39 goals and 13 assists in 44 appearances so far this season, Salah is undoubtedly one of the front-runners for the award as the 25-year-old has turned out to be a magnificent signing for the Reds.

The other five candidates have all been crucial for their respective sides too and so there is no denying that a strong argument can be made for each individual to be involved in the running for the award.

However, as noted by several Liverpool fans below, they were shocked that Roberto Firmino hadn’t done enough to earn a spot in the final list.

To his credit, the Brazilian forward has had a very impressive season too, but perhaps he hasn’t received as much praise as he deserves given Salah has stolen the limelight.

The 26-year-old has 24 goals and 14 assists in 46 outings, 14 goals and seven assists coming in the Premier League, and so it’s easy to see why these Liverpool fans believe he should have been included.

Despite their protests, he won’t be in the mix, with Man City dominating, partly perhaps due to the fact that they are on course to wrap up the league title in the coming weeks which arguably gives them the advantage in such awards.

Think firmino should be ahead of both sane and silva…

Firmino in ahead of Sane… All day long

How on earth did Firmino not get nominated for player of the year.. the man has been incredible this year

I think Firmino can count himself as unlucky not to be shortlisted for the @PFA #POTY award. He’s had a phenomenal season as a false number 9.

Firmino can feel very hard done by having not been nominated for a PFA award. He’s had a tremendous season, achieving his best goals tally for the club alongside 14 assists.

Would have had firmino before Silva

How is Firmino not there?

Firmino should be in that list instead of Sane. He deserved more.

Well I'm disappointed that Bobby Firmino hasn't been nominated for @PFA Player of the Year ;( Even though @22mosalah should be winning it #PFAawards #LFC @LFC

Firmino surely in that top 6. Shame.