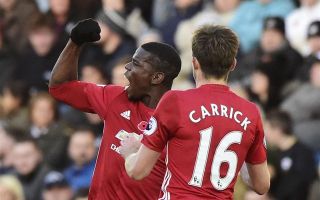 Michael Carrick’s influence on the pitch may be waning as he edges closer to retirement, but the Man Utd stalwart is still having a major impact it seems.

The 36-year-old has already confirmed that he will hang up his boots this summer, but it comes after a glittering spell at Old Trafford which has seen him make 463 appearances for the Red Devils.

On top of that, he’s won five Premier League titles, the Champions League, the Europa League and the FIFA Club World Cup, and so he knows exactly what it takes to succeed at Old Trafford.

Ahead of joining Jose Mourinho’s coaching staff, it appears as though the veteran is already having an influence on his teammates, as he has revealed what he said to Paul Pogba which helped spark his double in the Manchester derby last weekend which completed a sensational turnaround in a 3-2 win.

“I’m glad I did [have an impact] because it shows little things do register with players.”

With all that experience that he has accumulated, Carrick is undoubtedly still a vital voice in the dressing room even if he has been unable to have as much influence on the pitch as he would have liked.

Coupled with the fact that he is set to move into coaching after this season, these are promising early signs for him that he knows how to deal with players and he’ll hope to take that with him into the next chapter of his career.

As for Pogba, he deserves credit too for taking the advice on board and going out to play a crucial role for his side as they postponed Man City’s title celebrations in a crunch showdown.