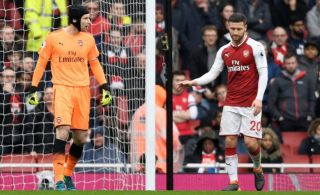 The Gunners went ahead through a well-worked goal by Alexandre Lacazette, but as we approach half time the game has already been levelled up as Arsene Wenger’s side fail to hold on to a lead.

Fans are blaming both goalkeeper Petr Cech and defender Shkodran Mustafi for messing up, with both players certainly looking culpable.

Mustafi was slow to react to the danger while Cech was beaten at his near post – something top ‘keepers really shouldn’t be struggling with.

@PetrCech Just retire already ? you are insulting the game now

Cech needs to retire after this season

Gabriel was at Mustafi's level. Cech is beneath Szcz?sny's level. We got some serious business to conduct this summer.

Agent clarifies rumours on exit for Arsenal ace as he sets a timescale for his departure January 26, 2021 22:56
Arsenal FC