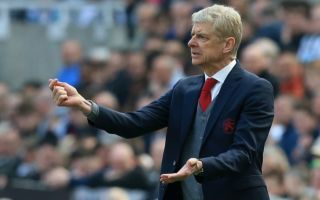 Arsenal threw away a one goal lead at St James’ Park this afternoon, as the Gunners suffered an embarrassing defeat to Newcastle to keep up their poor away league form in 2018.

The Gunners took lead midway through the first half thanks some find play which ended up with Alexandre Lacazette finding the net.

The Magpies then equalised just before half time thanks to a goal from Ayoze Perez, with Matt Richie grabbing the eventually winner midway through the second period to complete the comeback for Rafa Benitez’s side.

The result now means it’s almost impossible for the north London side to secure a top four finish in the league season, meaning that they would’ve missed out on a Champions League for the second season in a row. Not good.

We’ve picked out the Good, the Bad and the Embarrassing from Arsenal’s poor defeat in the north east.

Despite losing the game, Arsenal duo Lacazette and Pierre-Emerick Aubameyang still managed to produce some exciting link-up play together, as the pair showed exactly why the Gunners forked out so much to bring them to England in their goal.

Aubameyang’s fantastic cross was finished off impeccably by Lacazette to give the away side a great start the first half, something that should install Arsenal fans with a bit of confidence going forward.

Some suggested that the two forwards wouldn’t be able to play in the same team together, however Lacazette’s strike proved all the doubters wrong today. Fair play.

This fan certainly agrees with what we have to say about the Gunners duo!

Superb touch from Aubameyang and what a finish by Lacazette. 11th Premier League goal for him. Arsenal's forwards proving they can play together. 1-0.

Arsenal, in genreal, were very poor today, however the performance of Petr Cech was one that was definitely a sight for sore eyes.

The former Chelsea star had a torrid time in net for the Gunners this afternoon, with the Czech’s positioning for Newcastle’s second goal being very questionable indeed.

Since moving to the Emirates, Cech has failed to win over all of the Gunners faithful, with fans constantly calling out the shot-stopper for consistently putting in below par performances for the north London side.

This fan certainly made his views on Cech very clear during the match!

Cech is just awful man. That's basic goalkeeping to close your near post from that angle. Ffs.

Following this defeat, Arsenal are now the only team in England league football to have lost all of their away league games in 2018, a record that will surely see fans call for the head of manager of Arsene Wenger.

Time and time, the Gunners have shown to be spineless and lacklustre away from home, something that will definitely need to change if they’re to work their way back into the hunt for the title next season.