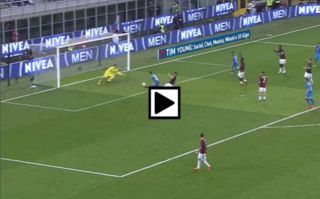 AC Milan’s impressive young ‘keeper Gianluigi Donnarumma capped off his 100th Serie A appearances in style this afternoon, after the Italian produced a world class save to clinch a draw for Gennaro Gattuso’s side.

The Italian, who has somehow already clocked up a ton of league appearances in Italy’s top flight despite being just 19, produced a save any goalkeeper in the world would be proud of this afternoon to save Milan from another league defeat.

MORE: AC Milan could be open to swap deal with €40m ace, plus crucial Belotti update

The Italian wonder-kid isn’t shy to putting in stellar performances for Gattuso’s team, as Donnarumma has shown time and time again through his short career thus far that he more than capable of becoming one of the world’s top shot-stoppers.

Here’s a clip of the Italian’s wonder save against Maurizio Sarri’s side this afternoon at the San Siro. What do you make of it? Is it one of the best saves you’ve ever seen? Let us know below.

? Donnarumma has just pulled off probably the best save of his career.

? Stops Napoli from taking the win in the 91st minute…pic.twitter.com/XZwM1Fzhfq