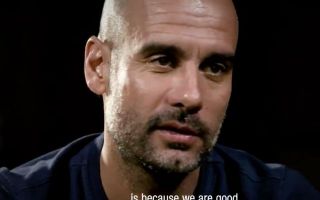 Man City boss Pep Guardiola has been discussing his winning philosophy after guiding the club to the Premier League title this season.

Posted on Monday night, it’s unclear when the recording was made as the Spanish tactician outlines the fundamental aspects of his ideologies and vision for how he wants his teams to play.

It’s an intriguing insight into what he demands from his players in training, to what he requires from them on the pitch both on and off the ball.

Having now won seven league titles in nine years as a manager, it also helps to paint a picture as to why he has been so successful to this point in his coaching career and what sets him apart from his rivals.

It remains to be seen whether or not Guardiola can continue this incredible run of success having now done the double at Man City with the league title and League Cup this season, but it’s the style with which they’ve won it that has certainly impressed many this year too.

Pep’s winning philosophy in his own words… #mancity ? pic.twitter.com/F9A8gAfHXE