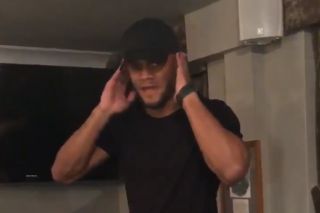 Manchester City captain Vincent Kompany delivered an epic speech to players and fans as they celebrated the club’s latest Premier League title triumph in a pub.

It’s been a bit of a longer wait for the third one, but that only seemed to make Kompany relish the moment even more as he gave a short but passionate speech about their win this season.

‘It’s been a f****** long journey,’ he said. ‘Especially if you’ve been a Blue for more than forty years. But tonight, we win it again. So lets celebrate together!’

City were confirmed as champions somewhat unexpectedly yesterday as Manchester United slipped to a shock 1-0 home defeat to West Brom, who remain bottom of the Premier League and who won only their fourth game all season.

United beat City just over a week ago to delay their title celebrations, but Pep Guardiola’s side were back to their best this week with a 3-1 win away to Tottenham to give themselves a chance, though few were expecting United to slip up this time and it was largely thought the Citizens would have to wait until their next game to celebrate.