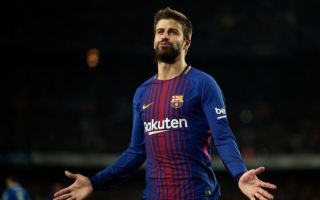 The right-back position is seemingly an ongoing area of frustration for Barcelona, but Gerard Pique has reportedly had his say on a potential solution.

Since Dani Alves left the club in 2016, the Catalan giants have arguably failed to find a suitable long-term replacement to fill the role.

SEE MORE: ‘Don’t give a Ferrari to a truck driver’ – Barcelona fans fume with Valverde after draw

Nelson Semedo has played there this season, making 31 appearances in all competitions, while Sergi Roberto has continued to show his versatility at times to feature there too.

However, according to Don Balon, as re-reported by The Express, speculation continues to link Barcelona with a move for a new right-back, but Pique doesn’t want it to be Arsenal’s Hector Bellerin.

In truth, it’s easy to see his reported viewpoint. The 23-year-old hasn’t quite been at his best this season, and he has struggled to show consistency and reach the level that he had set in previous campaigns.

While there is no denying that Bellerin is a top player and has his whole career ahead of him still to improve and develop further, Barcelona would arguably be better off with an established and experienced signing or another young talent who can claim the spot for years to come.

While Sergi Roberto continues to do a commendable job in that role when called upon, if Semedo isn’t entirely convincing, then Barcelona arguably need a natural in that role to flourish and to offer a balance to the side with Jordi Alba on the opposite flank.

Pique is seemingly keen on Bellerin not being the answer to the problem, as per the report above, but it remains to be seen who could arrive this summer to finally solve the issue.