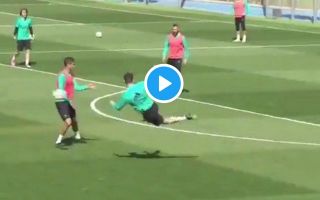 Real Madrid superstar Cristiano Ronaldo seemingly doesn’t like a simple finish in training, as evidenced by this latest effort.

The 33-year-old stunned everyone with his sensational finish against Juventus in the Champions League earlier this month, producing a brilliant overhead kick which even earned him a standing ovation from the home supporters in Turin.

SEE MORE: ‘To humiliate a rival, I don’t like it’ – La Liga chief supports Real Madrid stance on snubbing Barcelona

He’s since recreated that strike in training, and now he’s come up with this finish in what looks like a casual kick-about with his teammates.

Admittedly, it isn’t the best Ronaldo finish you’re going to see in his career highlights package, but what it does show again is that he works tirelessly on his finishing in training to make his effort against Juventus possible.

It’s that work ethic that arguably helps set him apart from the rest, and he’ll be hoping he can produce another quality finish or two to help Real Madrid win the Champions League this season while also having an eye on Portugal’s hopes at the World Cup in Russia this summer.