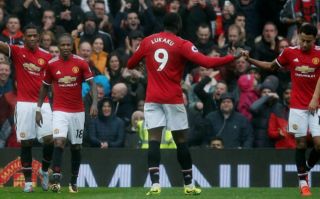 Man United fans took to Twitter to urge Jose Mourinho not to sell Anthony Martial following the player’s display in the Red Devils’ 2-0 win against Bournemouth this evening.

The away side took the lead thanks to a fine team goal that was eventually finished off by England star Chris Smalling, his third goal away from home in a row.

Jose Mourinho’s side then doubled their lead, and all but wrapped up the win, midway through the second period, after a fine pass from Paul Pogba was expertly finished off by Romelu Lukaku to make the score 2-0 to the Red Devils.

During and after the match, fans took to social media to plead to boss Jose Mourinho not to sell Anthony Martial.

It had been reportedly recently by the Times that the Frenchman was angered by the fact that he wasn’t allowed to talk with Arsenal about possibly moving to the Gunners this season, something that has thrown the player’s United future into doubt.

Fans certainly made their opinions known tonight, with most of United’s supporters begging that the club don’t let go of the France international any time soon.

Here are a few select tweets from fans begging for United to keep ahold of Martial in the near future.

@AnthonyMartial a joy to watch he’s a exactly what we need the ball is stuck to his feet . BIGGEST MISTAKE If we sell him .

We can’t sell Martial. It’ll be one of the club’s biggest mistakes. He’s 22 ffs, imagine when he’s 25 and perfected his game.

Fml Martial is an absolute wizard on the ball . Please I beg of you not to sell him @ManUtd

I swear I will kill someone if we sell Martial this summer. Absolute baller

It's so good seeing Martial on the pitch. Really do not want him to leave. Can rather sell Sanchez #MUFC

I'm going to cry If they sell Martial.