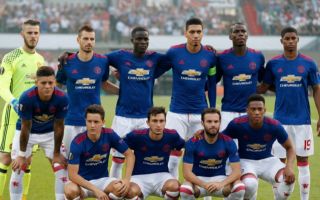 Jose Mourinho is reportedly willing to seal the departures of David De Gea, Marcus Rashford and Anthony Martial in order to raise funds for a move for Barcelona star Marc-Andre Ter Stegen.

Don Balon are stating that the Red Devils boss is prepared for a raid from Real Madrid for Spaniard De Gea, and that he has has singled out German international Ter Stegen as a replacement for the current United star.

The news outlet are also stating that Ter Stegen’s deal contains a €180M release clause, and that Mourinho is willing to depart with both Rashford and Martial, as well as De Gea, to raise the funds to sign the Barca shot-stopper.

Since the start of last season, Ter Stegen has, time and time again, proven to all that he is one of the greatest shot-stoppers in the world.

The German has been in fine form this campaign, with his fantastic goalkeeping ability and lightning-fast reactions being one of the main factors behind Barcelona having one of the best defensive records in Europe this season.

The 25-year-old’s performances this season have helped Ernesto Valverde’s side keep a total of 23 clean sheets in 44 appearances, meaning that Ter Stegen averages a clean sheet every two games or so, a very impressive record to say the least.

Should United replace De Gea with Ter Stegen, they most likely won’t miss the Spaniard that much, as Ter Stegen has showed with his time at Barca that he is more than capable of stepping up the task when called upon.