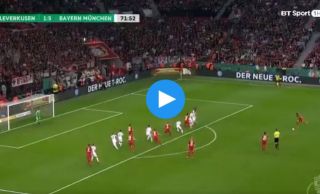 Manchester United, Chelsea and Arsenal may all want to take note as one of their rumoured £40million transfer targets showed why he’s so highly rated with this stunning free-kick goal.

Bayer Leverkusen winger Leon Bailey is having an outstanding season in the Bundesliga, and netted this beauty for his 12th of the season in all competitions.

The 20-year-old looks one of the most exciting young talents in Europe right now, and though he could not prevent a 6-2 defeat to the mighty Bayern Munich, he may have added a few million to his price tag with this sublime effort.

Earlier this season, the Daily Mirror claimed Manchester United, Chelsea and Arsenal were among his chief admirers in a potential £40m move, and it’s easy to see how he could fit in at any of those clubs.

Leon Bailey, that is outrageous ?

His team have conceded SIX but the Bayer Leverkusen man just scored an absolute worldie… ? pic.twitter.com/M1fkWzGAnH

With pace, skill and a rocket of a left foot, Bailey could be an upgrade on the struggling Alexis Sanchez for United, or indeed replace Anthony Martial and Marcus Rashford as they find themselves on the fringes of the first-team.

At Chelsea, the Jamaican starlet could be the ideal long-term replacement for Eden Hazard and give the likes of Pedro and Willian a run for their money in the starting XI.

Leon Bailey has impressed the likes of Manchester United this season

Arsenal still need to strengthen in attack as well after losing Sanchez, Theo Walcott and Olivier Giroud in January, with Bailey a clear upgrade on inconsistent performers such as Alex Iwobi and Danny Welbeck.