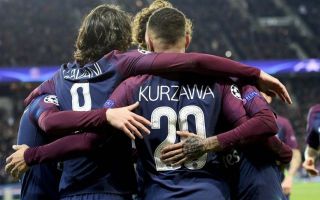 Manchester United and Chelsea are among the clubs interested in sealing the transfer of Paris Saint-Germain left-back Layvin Kurzawa this summer, according to reports in France.

The 25-year-old has been a top performer in Ligue 1 for both PSG and former club Monaco down the years, but it seems he’s gearing up for a move away this summer.

ESPN recently claimed Kurzawa had changed agents with anticipation of switching clubs, and the latest rumours suggest it could be a three-way battle to bring him to the Premier League.

According to RMC, United and Chelsea could face competition from Tottenham for the France international’s signature, with Spurs considering him as a potential replacement for Danny Rose.

United are known to be looking to make changes at left-back and are perhaps most in need of a player of Kurzawa’s quality as they look likely to allow Luke Shaw to leave in the summer.

The England international has failed to impress at Old Trafford, with Ashley Young largely picked ahead of him out of position on that left-hand side.

The Sun have reported that United want just £28million for Shaw, which could invite a decent number of suitors and clear them to replace him with Kurzawa.

Most United fans would probably agree that that would be very decent business by the Red Devils.