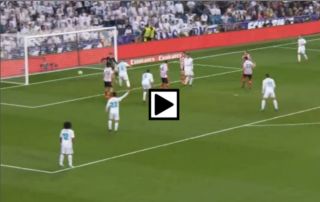 Cristiano Ronaldo bagged a cheeky back-heel for Real Madrid to rescue a point for Los Blancos in a match that effectively ended the Spanish giants’ title hopes for this season.

Bilbao took the lead in the first half thanks to a fine chip from Inaki Williams, however Ronaldo ended up drawing the home side level with just a few minutes to go.

MORE: Real Madrid told to fork out €60M should they wish to secure transfer of impressive Italian wonder-kid

The goal was the Portuguese superstar’s 42nd goal of the season, and was his 22nd in his last 12 appearances in all competitions, a phenomenal record.

However, Ronaldo’s goal was all that Real Madrid managed, as Zinedine Zidane’s side slipped to 15 points behind league leaders Barcelona in La Liga, a points differential that has effectively ended the slim hope Madrid had left of retaining their league title.

Here’s a clip of Ronaldo’s cheeky finish at the Santiago Bernabeu tonight. It seems like, at the moment, there is just no stopping this man.

The Cristiano Ronaldo back heel goal.