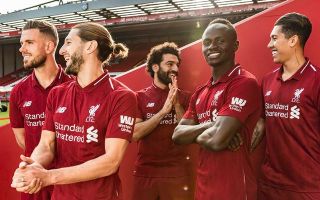 Liverpool unveiled their new kit for the 2018/19 season on Thursday, and it’s received a mixed response from supporters.

There aren’t huge changes to the home jersey, with New Balance remaining as the kit manufacturer while Standard Chartered are the main sponsors.

The Reds have gone with a collar though, and that has seemingly been the reason why fans are split on whether or not they like the new look, as seen in the tweets below.

Western Union remain on the sleeve, but overall it looks a very sleek and stylish kit in which the Liverpool stars will be hoping they can deliver major honours next season.

Jurgen Klopp’s side are still in the hunt for the Champions League this season, while they remain on course to secure a top-four finish in the Premier League.

In turn, they’ll likely be displaying their new kit across Europe next year as well, but these supporters are questioning whether or not it was a good idea to have a collar.

Further, it seems as though this season’s kit was a very popular hit with the Liverpool faithful, and so it was always going to be difficult to follow that up with another top design.

Absolutely love everything other than the collar

Get rid of the collar for fuck sake

Sorry, but colour of this kit is all wrong, not our red.

If it had a v-neck instead of a collar it’d be decent. Collars on kits are shite

It’s nice but nothing would ever top this season’s

Why’s there a collar on the kit I’m fuming

That would have looked nicer with a crew neck