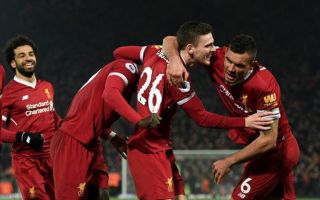 Liverpool fans will have been pleased to see the pictures coming out of the club’s Melwood training ground on Thursday.

With their Champions League semi-final first leg against Roma less than a week away, Reds will be praying that manager Jurgen Klopp has a fully-fit first team to choose from.

And it looks like Klopp will indeed be able to pick his strongest possible XI after Dejan Lovren joined his teammates for Thursday’s session.

? Dejan Lovren has returned to training. #LFC squad put through their paces ahead of Albion trip: https://t.co/ZgVDLCnQuw pic.twitter.com/rjFlNZRSnX

Lovren endured a difficult start to life at Anfield and has been branded a liability in the past.

But he has struck up a fine partnership with Virgil van Dijk following the Dutchman’s January arrival from Southampton and Liverpool are at their most solid when the pair are together.

Before hosting Roma, Liverpool visit West Brom in the Premier League on Saturday.

Lovren and multiple other senior stars could be rested with Klopp set to rotate his squad – just as he did for the Merseyside derby draw with Everton, which fell in between Liverpool’s quarter-final legs against Manchester City.

Dejan Lovren is back in training after limping off against Bournemouth last Saturday. #LFC pic.twitter.com/xowCQKQkIx