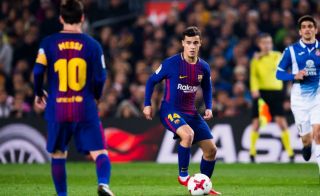 Barcelona playmaker Philippe Coutinho has conceded that he is feeling the nerves slightly ahead of his first major final for the club.

The Brazilian international joined the Catalan giants in January, and is steadily settling into life at the Nou Camp with two goals and five assists in 13 La Liga appearances.

More will be expected of the 25-year-old as time goes on, but the focus for now will be on Saturday’s Copa del Rey final against Sevilla as he has his first chance of winning silverware with Barcelona.

Naturally, there will be nerves. But he’ll have to put those behind him and play a crucial role in getting a win for his side as they will hope to use this as a boost to then go on and add the La Liga title to their trophy cabinet this season too.

“The anxiety comes, there are only a few days left until the game and you think about it. It’s going to be a difficult final where we have to be prepared to achieve the objectives that are met.”

Barcelona sit 12 points clear at the top of the La Liga table with just five games remaining for them this season, and so although they suffered a disappointing Champions League exit, it could still be a very successful campaign for Ernesto Valverde.

Coutinho will have a big part to play in ensuring that they pick up silverware this weekend, but it sounds as though his first challenge will be to put the anxiety to the side and play his natural game to help secure the win.