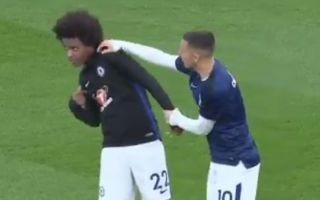 Antonio Conte risked the wrath of Chelsea fans on Thursday night when he dropped star duo Eden Hazard and Willian from his starting XI at Burnley.

Many Blues supporters indeed reacted with anger via social media.

However, the players themselves seemed totally fine as they warmed up among their fellow substitutes at Turf Moor.

The Belgian and Brazilian playmakers were pictured smiling and laughing before kick-off.

Perhaps they had been told that tonight’s rest guaranteed them a start in Sunday’s FA Cup semi-final?

Or maybe they just didn’t really fancy a battle with Burnley, who beat the Blues 3-2 at Stamford Bridge back in August?

Chelsea took the lead without their chief creators when Gary Cahill and Victor Moses combined to force an own goal.