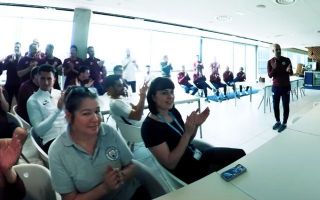 At the second time of asking, Man City boss Pep Guardiola delivered a Premier League title to the club. However, he was keen to acknowledge that it’s undoubtedly a team effort.

City secured the title with five games to spare this season, collecting 28 wins in 33 games to open up a commanding lead over nearest rivals Man Utd.

Their pace was unmatched throughout the campaign, and having not only secured the results to take them to the top, they’ve played with a style of football that has earned them plaudits from all corners.

Naturally, there is no doubt over the impact and influence that Guardiola has had on this team, along with the hierarchy who have backed him in the transfer market and assembled a strong squad capable of winning major trophies.

However, the Spanish tactician, as seen in the video below, sat the entire club staff down along with the players and coaching staff this week to thank them and congratulate them on being a vital part of the club’s success this season.

It’s a brilliant touch from Guardiola and a great gesture which will undoubtedly have been appreciated by all. Now, he’ll be hoping that they can replicate their success next season and do even better to ensure that Man City lead the way in England and beyond.