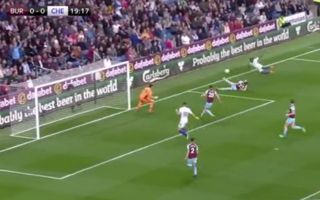 It might not have been pretty but they all count.

Chelsea took the lead at Burnley on Thursday night when a clumsy Kevin Long scored an own goal.

But Long did not simply gift the goal to the Blues – they forced it.

Scroll down for video

Two players combined for Antonio Conte’s men to impressive effect, with Gary Cahill picking out Victor Moses with a fine long-range through pass.

Cahill’s pass was perfectly measured and Moses took an excellent first touch before crossing the ball into the danger area where Long’s error occurred.

Moses now has three Premier League assists this season – one more than he provided last term.

Burnley's Kevin Long puts the ball into his own net to hand @ChelseaFC the lead! Watch the own goal below…