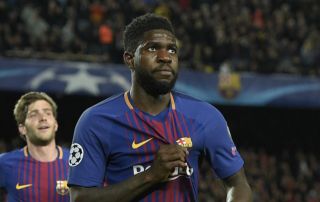 With the ongoing reported issues over Samuel Umtiti, Barcelona have continued to be linked with a summer swoop for Sevilla defender Clement Lenglet.

As noted by The Sun, the French international’s future has been a hot topic of discussion due to issues with his contract situation, with Man Utd linked with a move to complicate matters further.

Given the partnership that he has established with Gerard Pique in the heart of the Barcelona defence, one that has conceded just 19 goals in 33 La Liga games this season to help them remain unbeaten, the Catalan giants will surely be desperate to avoid losing him.

At just 24, Umtiti has already emerged as a key figure for Ernesto Valverde and seemingly has his whole career ahead of him to become a stalwart for the league leaders.

However, as noted by Calciomercato, it’s suggested that just in case they aren’t able to reach an agreement with the former Lyon star, Lenglet has emerged as an alternative and Plan B but will cost €35m as per the release clause in his contract.

The 22-year-old only joined Sevilla in 2016, but such has been the impressive nature of his performances for Vincenzo Montella’s side, he has seemingly already attracted interest from the Nou Camp.

Having won the Ligue 2 title with Nancy and now with 67 appearances for Sevilla to his name, he has continued to attain crucial experience and proven that he can deal with the step up in level.

Lenglet has also represented France at every youth level, and provided he can continue in this vein of form, he’ll soon be knocking on the door for the senior side too.

In turn, he seems like a sensible replacement for Barcelona at that price too given today’s transfer market. However, Valverde will surely prefer to keep his key players in place moving forward rather than have to replace them at all.