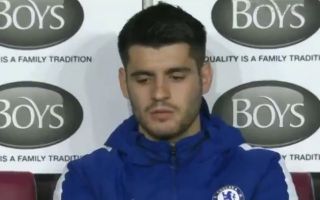 Chelsea striker Alvaro Morata’s struggles continued on Thursday night as he failed to find the mark in his side’s 2-1 win over Burnley.

The 25-year-old has managed just 14 goals in 43 appearances so far this season, as he was guilty of another major miss in midweek, which fortunately for the Blues didn’t prove costly as they continue to chase a top-four finish in the Premier League.

Having been substituted by Antonio Conte in the 71st minute, the Spaniard cut a frustrated figure, and as seen in the video below, he was furious as he took his place on the bench.

WATCH: Alvaro Morata was not happy about being substituted during Chelsea’s win at Burnley, but is his starting spot now in jeopardy? ?

We look at the striker’s struggles after another frustrating night: https://t.co/bkDmfKeEGl pic.twitter.com/idZQ5rUWtv

It was unclear at the time as to whether he was upset with the decision to be replaced or if it was related to the fact that he spurned another great opportunity to rediscover his form and hand Chelsea a boost.

As noted in his Instagram post below, he confirmed that it was due to his own performance, as he apologised to all for his reaction.

It remains to be seen if Conte continues to show faith in him moving forward, starting with the FA Cup semi-final clash with Southampton this weekend as it could be a crunch few weeks for the Blues in their pursuit of silverware and Champions League qualification.

Three important points for us. The best way to get ready for Sunday’s game was winning today. I want to apologize for my reaction when I was sent to the bench, when I fail I get really angry with myself!! La mejor forma de preparar “la final” del domingo era ganar hoy!! Siento mi reacción en el cambio, estaba muy cabreado conmigo mismo!! #GOCHELSEA