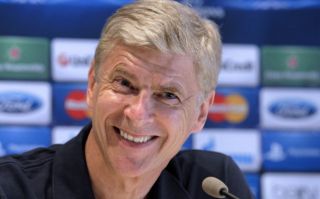 Arsenal boss Arsene Wenger has had his say on whether or not Patrick Vieira has the quality to potentially replace him at the Emirates one day.

As noted by BBC Sport, the veteran tactician confirmed on Friday his intention to step down from the job at the end of this season, ending a 22-year spell at the club.

Having now seemingly missed out on the top four in the Premier League again this season, he will be desperate to go all the way in the Europa League to secure a place back in the Champions League next year, albeit Atletico Madrid stand in their way in the semi-finals.

For now though, he has been discussing Vieira’s prospects of perhaps even replacing him as his successor in north London, suggesting that he will potentially have the qualities needed to take his place.

“He works in the moment in New York and he works for Man City. He’s a guy who has the potential one day, yes,” he is quoted as saying by Sky Sports.

“I’ve followed his managerial career. I think he does very well but overall, this Premier League is special. You have to come in and there are plenty of former players who played here who have potential, the intelligence and knowledge to do it.”

Vieira, 41, is undoubtedly a popular figure with the Arsenal faithful having led them to a successful stint in his nine years at the club between 1996 and 2005.

With almost 300 league appearances for the Gunners to his name, coupled with three Premier League titles and three FA Cups, he’ll surely have fond memories of the club too and be hopeful that a reunion could take place.

However, as noted by Wenger, it could prove to be complicated now having developed a working relationship with Man City as he currently continues to cut his teeth in coaching in MLS.