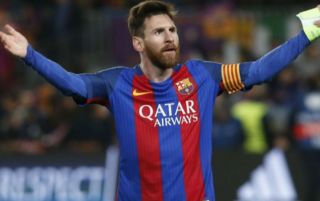 Amid ongoing speculation over his future at Man Utd, Lionel Messi has reportedly informed Barcelona that he doesn’t wish to see the club pursue Paul Pogba this summer.

The Catalan giants are closing in on a La Liga title and Copa del Rey double this season, as although Ernesto Valverde has been criticised at times for the style of play of his side, he has found a successful balance and a winning formula.

In turn, he’ll want to be cautious with any summer arrivals so as to avoid having a negative impact on that balance, albeit Barcelona arguably need to strengthen in certain departments to add quality depth in order to compete on various fronts next season having fallen short in the Champions League this year.

According to Diario Gol, as re-reported by The Express though, Messi isn’t in favour of signing Pogba as after the Frenchman previously rejected a move to the Nou Camp in favour of a Man Utd return, he reportedly doesn’t feel as though a second chance should be given to him.

Time will tell if Barca agree and refuse to pursue the 25-year-old, with The Daily Mail adding that United could demand a fee of around £140m this summer which could also potentially be a stumbling block to a move to the Nou Camp.

It’s debatable as to whether that would be a sensible decision as Barcelona arguably need to address their midfield sooner rather than later.

With the likes of Sergio Busquets, Ivan Rakitic and Paulinho all approaching, or already, on the wrong side of 30, the La Liga giants will need to bring in long-term replacements. Having spent significant money on the likes of Ousmane Dembele and Philippe Coutinho in the last two transfer windows though, that could be another reason against another marquee addition.

However, it seems Messi isn’t in favour of Pogba being the solution, and so it remains to be seen where he’ll be plying his trade next season as he continues to struggle to consistently deliver at Old Trafford.