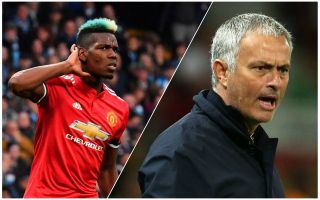 From the outside looking in, it hasn’t looked entirely rosy at Man Utd this season with Paul Pogba failing to consistently deliver for the Red Devils.

Whether that’s his inability to show tactical versatility and maturity to play the role being asked of him by Jose Mourinho, or the Portuguese tactician’s inability to get the best out of him or play him in his most effective role, it has led to inconsistent and disappointing showings from the Frenchman.

However, claims from The Daily Mail have now revealed the alleged extent of the issues behind the scenes between the pair, with suggestions that their relationship has severely deteriorated, to the point where it’s having an impact on Pogba’s closeness with some of his teammates.

It’s claimed that the 25-year-old has seen some distance themselves at the risk of Mourinho ‘disapproving’ and so that doesn’t paint a very positive picture of the situation at Old Trafford at all while it’s added that they’re not exactly on the best of talking terms.

As noted by ESPN, his agent Mino Raiola is said to be in contact with Paris Saint-Germain over a potential deal, and so it has to be said that the future of Pogba at Man Utd looks particularly bleak as we close in on the end of the campaign.

The former Juventus ace has made 31 appearances in all competitions this season, scoring five goals and providing 11 assists.

As seen against Manchester City a matter of a fortnight ago with his double that sparked United’s extraordinary comeback, the quality and ability is certainly there, but it simply hasn’t been displayed on a regular basis this year.

Coupled with these latest reports on Mourinho’s relationship with Pogba, perhaps selling him this summer may well be the most sensible outcome for all parties concerned. United could look to spend on a replacement with his fee, albeit they will have to be wary of the fact that Michael Carrick is set to retire and Marouane Fellaini could leave due to an expiring contract too.

As for Pogba, he may well need to kick-start his career elsewhere with a manager who perhaps knows how to best deal with him and get the best out of him on a consistent basis.