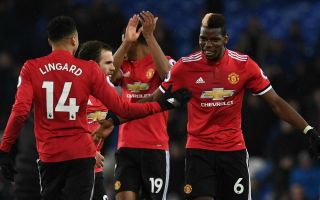 Manchester Utd and Tottenham Hotspur will compete in the FA Cup semi-final today at Wembley.

The Red Devils come into the game in good spirits after they defeated Bournemouth 2-0.

Their moral needed boosting after a shock 1-0 loss to West Brom at home to hand rivals, Manchester City, the title.

Jose Mourinho will be looking to win another FA Cup and he has won the FA Cup once, with Chelsea in 2006/07.

Tottenham were held to a 1-1 draw at Brighton on Tuesday night, however, they will be keen to end their 10-year wait for a trophy.

Spurs, will effectively have a home advantage, having used Wembley as their base this season.

When is Man Utd vs Tottenham and what time is kick-off?

Is Man Utd vs Tottenham on TV and is there a stream?

Jose Mourinho gave a huge indication that Nemanja Matic and Antonio Valencia would start the FA Cup semi-final against Tottenham after they were rested against Bournemouth.

Ander Herrera and Paul Pogba could retain their places in the starting XI after they were subbed off in the second half.

Toby Alderweireld will be keen to retain his place in the first XI after starting his first game in six months against Brighton.

Danny Rose and Kyle Walker-Peters are injury doubts, and Harry Winks continues to be sidelined.

Michel Vorm has played in every FA Cup game this season and could start in goal again.

Dele Alli is also poised to returning to the starting lineup.