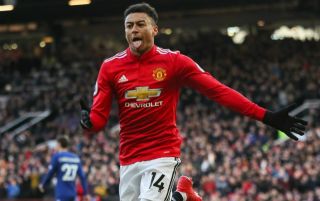 Jesse Lingard has been speaking about his youth days and has revealed that he made a big decision between potentially playing for Man Utd or Liverpool.

After coming through the youth ranks at Old Trafford, the 25-year-old has taken his time to have a consistently positive impact at senior level.

He has seemingly made a breakthrough in recent times, and particularly this season as he has 13 goals and seven assists in 43 appearances for the Red Devils.

However, his path could have been very different it’s been revealed, as Lingard has been discussing his youth and has admitted why he chose not to pursue a career with Liverpool which in turn has allowed him to go on and become a Man Utd player.

“One day I was at Liverpool and someone didn’t pass the ball to me and I thought, “I can’t be doing this”, he told the Daily Mail. “I walked out and said to my grandad, “Let’s stay at United instead”. I swear that was the reason.

“I felt more comfortable at United. I knew I had to make a choice.”

Lingard goes on to add that the faith later shown in him by Sir Alex Ferguson was also a major factor, as the legendary tactician acknowledged that he would come good later than others and that prediction has seemingly come to fruition.

Lingard will have to continue to improve and develop his game moving forward though if he wants to remain a regular for club and country, but that decision to choose United hasn’t turned out to be bad one for him.

Born in Warrington, it could have gone either way. But it’s the Red Devils who are benefiting from his decision and he’ll hope to continue to prove that it was the right one.