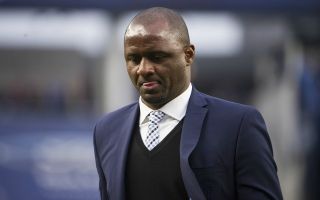 After Arsene Wenger’s announcement that he will step down from the Arsenal job at the end of the season, the focus is quickly shifting to his potential successor.

The veteran tactician has been at the helm for almost 22 years, and so it will be crucial that Arsenal get their next appointment right.

Various candidates out of work have emerged as possible options, but two other names that have been paired with the position are club legend Patrick Vieira and Celtic boss Brendan Rodgers.

Unfortunately for the Gunners if they were indeed considering them, or for Arsenal fans hoping either would be appointed, it sounds as though neither will be in the running at the end of the season.

Vieira enjoyed a stellar period in north London as a player, winning three Premier League titles and three FA Cups to establish himself as a popular figure with the supporters.

In turn, he would arguably be a welcomed option but given his lack of experience at the highest level as a coach, he has seemingly ruled himself out for the time being, as noted in the tweet below, as he continues to learn his trade with New York City FC in MLS.

Vieira: “I am always flattered to hear my name linked with different football clubs. That is good for your ego but at the same time, I am happy here. We will see what will happen in the next couple of years.”

Meanwhile, Rodgers also responded to speculation, as seen in the video below on BT Sport, as he insisted that he was happy at Celtic and had no intention of leaving with three more years remaining on his current contract.

As a result, it sounds as though these two names can be crossed off the list, and in turn, it remains to be seen which candidate gets the nod from the Arsenal hierarchy in the summer.

“I’m extremely happy here and I’ve got three years left on my contract.”

Brendan Rodgers has spoken on the links to Arsenal… pic.twitter.com/Tqfegh5KbV