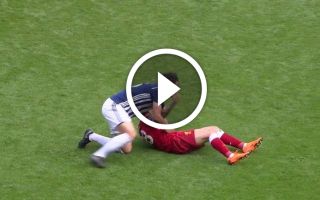 West Bromwich Albion defender Ahmed Hegazi was very fortunate not to be sent off against Liverpool on Saturday for this punch on Danny Ings.

The Egyptian international had seemingly fouled the Reds forward already after dragging him to the ground, but referee Stuart Attwell opted to give the free-kick in favour of the Baggies.

However, replays then showed that Hegazi had done more off the ball too, with the 27-year-old caught punching Ings in the stomach as he lay on the ground.

Evidently, it wasn’t with a great deal of force has Ings was able to immediately appeal to the officials to take action, but it was completely inappropriate from Hegazi who should expect retrospective action from the FA.

As noted in the tweets below, Liverpool fans were left furious with the defender and the referee, and in fairness, it’s poor officiating for them to miss it entirely. Nevertheless, it’s likely not to be the last that Hegazi hears about it.

WHAT THE FUCK IS HEGAZI DOING HERE ON INGS!!!! ???pic.twitter.com/LskPkUNf3D

Ref does nothing after Hegazi punches Ings. Surely you’re gonna do something about that, will you @FA? pic.twitter.com/gLW3JjQx6y

Why doesn’t the 4th official see the Ings/ Hegazi incident?? Should be red.

Do we ever get anything from the refs?

Should be season over for Hegazi there, dirty twat pic.twitter.com/gUCgrxf5bw

For rival fans who think Liverpool fans complain for no reason – Danny Ings was just fouled and then punched by Hegazi and West Brom were given the free kick. Unreal.

Hegazi getting a ban, well done