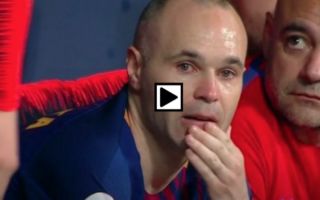 Barcelona and Spain midfielder Andres Iniesta was given an emotional ending to his last final for the Blaugrana, as the player was reduced to tears after being subbed off in his side’s 5-0 win over Sevilla.

The midfielder, who has won everything he could with Ernesto Valverde’s side, was subbed off with just a few minutes remaining in his side’s Copa Del Rey final victory, with all the fans in the stadium giving the 33-year-old a standing ovation.

The Spanish giants ended cruising to a 5-0 win over Vincenzo Montella’s side, with Iniesta himself getting on the scoresheet as he bagged Barca’s four of the match.

It was Barca’s fourth Copa Del Rey victory in a row, with Ernesto Valverde’s side just one win away from securing their second double in three seasons.

Here’s a very emotional video of Iniesta taking his final steps on the pitch in a final for Barca. An absolute legend of the game, it was great to see all the stadium pay their respects to one of the greatest midfielders of this generation.

Iniesta in tears as he left the field and the entire stadium gets up on their feet to give him a rousing ovation
A true legend of the game is saying goodbye.
Thanks for everything Don Andres. pic.twitter.com/HCgVYE0MwP