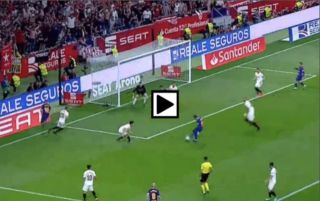 Lionel Messi and Jordi Alba continued their world class partnership tonight, with the Spaniard setting up the Argentine put Barcelona 2-0 up against Sevilla in the Copa Del Rey final.

Having opened the scoring thanks to a tap-in from Luis Suarez, with Alba and Messi combining once again to put the Blaugrana two goals to the good.

MORE: Luis Suarez highlights one player he wants to replace him at Barcelona, ace could make transfer for bargain price

The goal is the eighth time this campaign that Alba has set up Messi, with a vast majority of these other goals coming in La Liga.

With the Copa Del Rey now all but sewn up, it seems like Barca now only have to worry about securing the La Liga title with a win over Deportivo next Sunday.

Here’s a clip of Messi and Alba astonishing link-up. Honestly, sometimes these two would make you think they can communicate telepathically are showing just how good they are together this season.

?| #CopaBarça | Messi’s goal with a super backheel assist from Alba…!pic.twitter.com/4afIkJrUZe