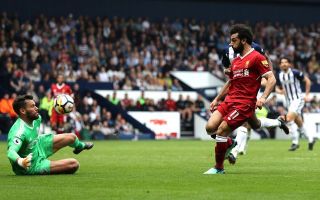 Liverpool forward Mohamed Salah equalled the record for the most goals in a single 38-game Premier League season with his 31st goal of the campaign against West Bromwich Albion on Saturday.

A feat only previously achieved by Alan Shearer, Cristiano Ronaldo and Luis Suarez, the Egyptian international will hope to write his name into Premier League history by surpassing the record next time out.

However, Liverpool fans will be delighted with his impact this season regardless of that, as he showed incredible composure and quality again to produce a sublime dink finish over Ben Foster to double Liverpool’s lead at the Hawthorns, as seen in the video below.

Unfortunately for Jurgen Klopp’s men though, they weren’t able to hold on for all three points as despite Danny Ings bagging a goal in the first half, late replies from Jack Livermore and Salomon Rondon ensured that the Reds had to share the spoils as they dropped crucial points.

While their focus will now quickly switch to the Champions League as they prepare to face Roma in their semi-final tie on Tuesday night with the first leg at Anfield, their slip-up could give Chelsea hope of snatching a top four finish.

Antonio Conte’s side are eight points behind with a game in hand, with Liverpool having just three games remaining this season as they visit Stamford Bridge on May 6 too.

For now though, they’ll be marvelling over Salah’s impressive achievement.

He equals Luis Suarez’s record of most goals scored by a #LFC player in a season!