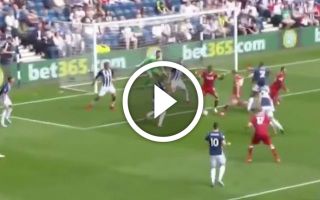 Liverpool forward Danny Ings was a relieved man on Saturday as he finally ended his wait for a Premier League goal having scored against West Brom.

The 25-year-old has had horrendous luck with injuries since moving to Anfield, and that in turn has kept him sidelined for significant periods.

Competition for places has also been an issue, but he was given the nod by Jurgen Klopp at the weekend as he rotated and rested Roberto Firmino with one eye on Tuesday night’s Champions League meeting with Roma.

Ings rewarded that faith as he bagged an early goal for the visitors at the Hawthorns, and it was a huge moment for him personally as well as he ended a 930-day wait for a Premier League goal, having last scored in October 2015 against Everton.

However, he’ll owe a huge debt of gratitude to Sadio Mane, as the Liverpool winger produced this brilliant bit of play to create an opening for Liverpool before delivering a ball into the box which Ings duly dispatched into the back of the net.

Sadio Mane is quite good at the football. That flick over Rodriguez’s head was something else. pic.twitter.com/RrgKc6f2D9