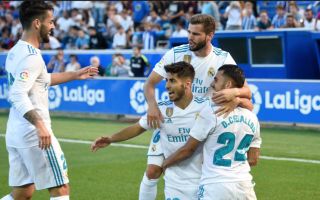 It’s been a difficult season for Real Madrid midfielder Dani Ceballos, as he hasn’t been able to secure regular playing time under Zinedine Zidane.

The 21-year-old would undoubtedly have arrived at the Bernabeu from Real Betis last summer with big hopes of making an immediate impact, but it hasn’t worked out that way.

Instead, he’s been limited to just 20 appearances in all competitions, with the majority of those coming off the bench, and naturally that has led to speculation over his future.

At this stage of his career, and particularly having impressed at Betis, he will not want to see himself stagnate and remain on the sidelines for Los Blancos, as he will undoubtedly be itching to play regularly.

In turn, as noted by The Daily Star, that has led to speculation linking him with an exit, with Liverpool even said to have reached an agreement with him.

However, Sky Sports pundit Guillem Balague has seemingly refuted that claim, by insisting that Ceballos isn’t even seeking a summer exit from the Spanish capital, as he is adamant about fighting for his place and proving his worth to Zidane moving forward.

“Ceballos is of the thinking that he’s at the perfect place for his football, after all, he’s at Real Madrid. So it’s just a matter of him fighting for more playing time,” he said in his Sky Sports Q&A session.

“Ceballos wants to fight for his place. There will be changes in the make-up of Real Madrid’s squad next season so I think he will want to be there.”

That doesn’t paint a particularly positive picture for Liverpool if they harbour hopes of prising Ceballos away from Real Madrid this summer, but it’s a commendable approach to have from the youngster if true.

He is undoubtedly in a great place at Madrid with a chance to win major honours and establish himself as one of the top players in European football in years to come. In turn, if he can be patient and bide his time for the likes of Luka Modric and Toni Kroos to require more rotation, then it might turn out to be the right decision to stay where he is.