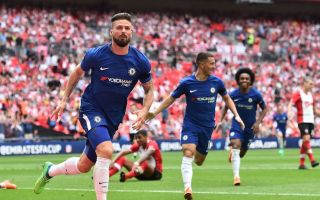 READ ALSO: Wenger replacement at Arsenal could have his future decided this evening with Chelsea also eyeing the manager’s signature

Goals from Alvaro Morata and Olvier Giroud helped Chelsea to ease past Southampton and to book their place in their second FA Cup final in two years.

Antonio Conte’s side will have a chance to rewrite last season’s final in which they were beaten by Arsene Wenger’s Arsenal.

Giroud gave Chelsea the lead one minute into the first-half before Alvaro Morata came off the bench to double the lead for the Blues on the 82nd minute.

Olivier Giroud has had a superb week in a Chelsea shirt after scoring twice in a 3-1 win over Southampton last weekend. The Frenchman was given the nod by Conte this weekend to lead the line and the star did not disappoint. Giroud has proven to be a vital signing since joining from Arsenal and has played a major role in dislodging Alvaro Morata from the regular starting eleven for Chelsea.

Giroud just turned into Messi…sort of.

Mark Hughes has not had a favourable start since taking over Southampton in the last few weeks and it now looks as though the Saints cold be on course for relegation alongside today’s FA Cup exit. Southampton sit four points adrift from safety with just four games to save their place in the Premier League.

2 – Mark Hughes is just the second manager to be eliminated from the FA Cup as manager of two Premier League teams (Stoke and Southampton) in a single season, after Glenn Hoddle in 2000-01 with Southampton and Spurs. Magic? pic.twitter.com/kSzVE8j1FS

Alvaro Morata scored a vital goal not just for Chelsea but also for himself. Morata has struggled in recent months and has often found himself on the bench for key games. For example, Morata was dropped from Chelsea’s first-leg tie with Barcelona in the Champions League and has often been scapegoated for Chelsea’s poor season.

9 – Alvaro Morata has scored nine headed goals in all comps; two more than any other Premier League player. Bonce.