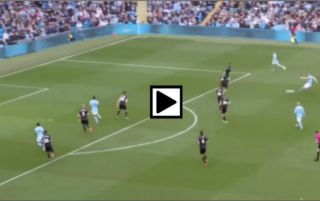 Kevin De Bruyne showed he truly is a world class player this afternoon, as the Belgian scored an absolute thunderbolt to put Man City in cruise control against Swansea at the Etihad.

The Belgian international, who is firmly in the running for the PFA Player of the Year award this season following his stellar campaign, scored an absolute peach of a strike to give Man City what should be an unassailable lead against the Swans.

It was the midfielder eighth league goal of the season, meaning that he has now contributed to 23 league goals (8 goals, 15 assists) for Pep Guardiola’s side this season, which is almost a quarter of their entire tally for this season.

Following the goal, City now need just eight more goals to take the record for most Premier League goals in a season, one that they’ll surely claim come the end of the campaign.

Here’s De Bruyne stunner against Swansea this afternoon. Is it the best you’ve seen this season? Let us know below