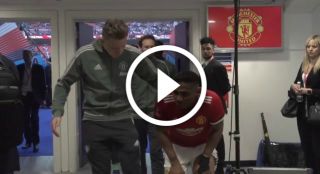 Man Utd captain Antonio Valencia was forced off in the latter stages of his side’s win over Tottenham in their FA Cup semi-final clash on Saturday evening.

Having picked up a knock, he attempted to run it off initially but was forced off as Matteo Darmian took his place in the side for the final 10 minutes or so.

Fortunately for United, they were able to to defend well and protect their 2-1 lead to book their spot in the final next month where they will face Chelsea at Wembley on May 19.

However, it was clear Valencia was still struggling after the full-time whistle as he made his way down the tunnel.

Youngster Scott McTominay was in hand to offer his help though, as he was picked up on the microphones saying: “Captain, put your arm around me”.

Valencia opted to soldier on without him, but it says a lot about McTominay’s attitude and willingness to support his teammates in any way he can.