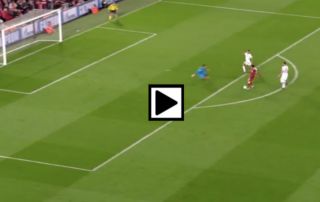 Mohamed Salah bagged another fantastic goal for Liverpool tonight in their Champions League semi final against Roma at Anfield.

The Egyptian originally opened the scoring just a few minutes before half time, with the Reds goal-machien doubling his and his side’s tally for the night a little bit later.

Salah has now bagged 43 goals this campaign, a tally that even the likes of Messi and Ronaldo would be proud to call their own.

The forward has effectively put one foot in the final for Liverpool after his first half showing tonight, and to top it all off, he even refused to celebrate. Absolutely top class.

Here’s a clip of Salah’s second wonderful finish this evening against the Italian giants. It’s incredible how he’s able to stay to calm under pressure in such a intensity match. Ballon D’Or winner 2018 anyone?

Mohamed Salah with another piece of brilliance. 2-0. pic.twitter.com/1gySjVLCEc