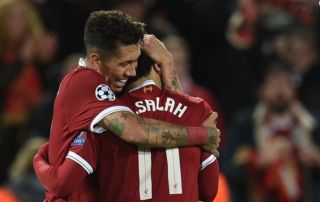 Liverpool take on Stoke City in the Premier League on Saturday lunchtime.

The Reds will be full of confidence after they produced yet another blistering display at Anfield to defeat Roma 5-2 in the Champions League semi-final first leg.

Mohamed Salah once again provided the inspiration for his team – producing two goals and two assists against his old club.

The Egyptian has sparkled for the Reds this season and took his remarkable goals tally to 43 for the season.

He is now only four behind Ian Rush’s all time record for goals in a single season.

The Potters enter the game on the back of a 1-1 draw with Burnley after Ashley Barnes equalised to cancel out Badou Nidaye’s opener – they will be hoping Jurgen Klopp rests key players for the second leg Champions League clash in Rome.

When is Liverpool v Stoke and what time is kick-off?

The game will take place on Saturday, April 28 at Anfield.

The big news from the game is that Alex Oxlade-Chamberlain could face a lengthy spell out after suffering with a knee injury.

The midfielder could also face World Cup heartache and miss the tournament.

Reds’ boss Jurgen Klopp said: “Oxlade-Chamberlain is probably a really bad injury. That is bad news for us. The squad doesn’t get bigger at the moment so we need to be creative in the next few games.”

The Potters will be without goalkeeper Lee Grant, who has been out of action since February with a wrist injury.

“We are Liverpool. It’s all inclusive football, everything is involved, and we obviously have to go the hard way.”

Jürgen Klopp speaks to @DesKellyBTS following the 5-2 victory and provides an update on Alex Oxlade-Chamberlain. pic.twitter.com/XFn0477mGG