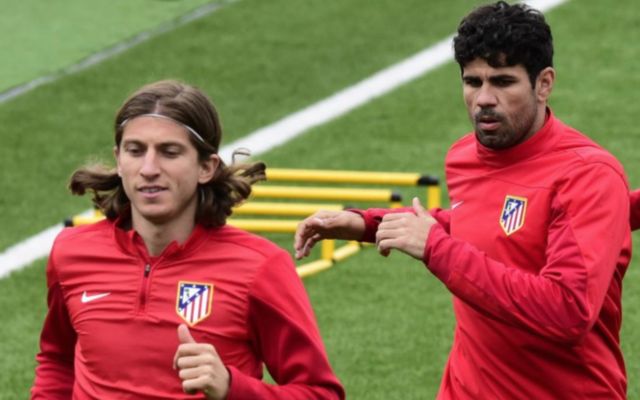 Diego Costa starts on the bench tonight for Atletico Madrid as they take on Arsenal at the Emirates in the Europa League semi-final first leg.

The former Chelsea man is also on the bench with Fernando Torres with Antoine Griezmann and Kevin Gameiro starting upfront for Atleti.

The statement read: “Diego Costa has recovered from the injury he suffered to his left hamstring in our UEFA Europa League quarter-final match against Sporting CP in Lisbon.

“He will be available for selection for Thursday’s UEL semi-final match against Arsenal at the Emirates Stadium.”

Yesterday, Atletico Madrid manager Diego Simeone said Costa could feature in the Europa League semi-final match at the Emirates after ruling him out of the game last Saturday.

?| @diegocosta has received the medical green light and is available for tonight’s match.
? https://t.co/6j2EDxkPID#ArsenalAtleti #AúpaAtleti #UEL

He said Costa’s condition had improved and he could even start tomorrow against the Gunners.

Simeone said: “He has improved. He trained hard yesterday and will train today. He will either play from the start or the bench

“We’ll obviously weigh up all the factors. We’ll speak with the footballer and the medical team. I’ll be looking to help the team in the best way possible, I won’t look to make Diego happy or do whatever suits me.”

Arsenal and Atletico have never played a competitive match in Europe together and it promises to be a pulsating encounter.