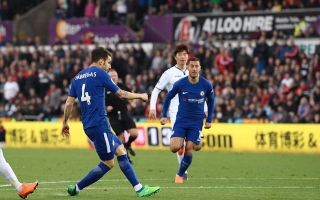 Cesc Fabregas lead Chelsea to a narrow victory over Swansea City at the Liberty Stadium this evening as Antonio Conte’s side clinched a vital three points.

READ ALSO: “An awful footballer” – Chelsea fans distraught with one star vs Swansea and demand to “sell him”

Cesc Fabregas opened the scoring on the fourth minute for Chelsea with the Spaniard’s opener proving to be the only goal of the game.

Chelsea now sit just two points adrift from Tottenham in fourth place after it had looked as though Champions League football could be out of reach for Antonio Conte’s side.

50 – Antonio Conte has now won 50 of his 73 Premier League games as manager; only Jose Mourinho (63) and Pep Guardiola (69) reached 50 wins quicker in the competition. Esteemed. pic.twitter.com/aUVGhHfN5p

Swansea on the other hand are only one points adrift from the relegation zone and it looks as though the Welsh side will have to fight for their safety until the final day of the season.

Cesc Fabregas produced a performance today that was evocative of the energy and creativity he showed in his early Arsenal days alongside the experience and composure his illustrious career has granted him. The Spaniard is now only the fourth player in Premier League history to have registered over 100 assists and scored over 50 goals in the league. Fabregas joins an exclusive club including Wayne Rooney, Frank Lampard and Ryan Giggs.

Cesc Fabregas has become just the fourth Premier League player to ever register 50+ goals and 100+ assists.

Swansea looked in serious danger and today’s fixture presented them with numerous opportunities to steal a point with the Welsh side being prevented to register an equaliser on numerous occasions in the final 30 minutes. Could today’s performance be a formative result in the Welsh side’s potential relegation?

Victor Moses is a key Chelsea star who has failed to recapture title winning form this season. The Nigerian had a glorious opportunity to score a second on the 72nd minute but he somehow managed to poke a Cesc Fabregas delivery wide. A poor day at the office, Victor.